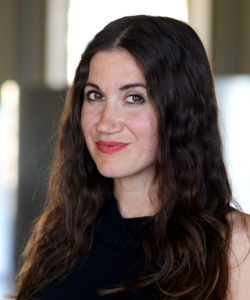 Bernadette Weber (1987) is an Austrian documentary filmmaker and cinematographer, with Italian background, who is currently based in The Hague and Barcelona, and has mainly been active in the field of social and political documentary. She majored in Cinematography at ZeLIG School for Documentary, holds a Master’s Degree in Philosophy and is a PhD candidate in Ethics and Political Philosophy.
Bernadette has worked as a Cinematographer, Videographer, Editor and Videojournalist in different fields (docs, shorts, advertising, music, theatre) and operated as a (co-)author/director in several documentary projects. Her latest works include “Exiles” (Feature Documentary, 2018), “The others and us” (Participatory Documentary, 2016) and “Moon Europa” (Feature Documentary, 2016).
She is a co-founder and member of LAND – Local Audiovisual Network & Development and Studium.